Drum was commissioned in 1974 by Frank Oppenheimer for his museum, the Exploratorium in San Francisco. In 1992, Stephan von Huene bought it back and rebuilt it. 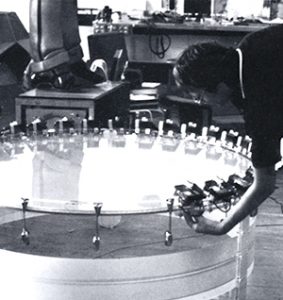 “I started working in 1961 as a painter and slowly moved toward sculpture and object making. By 1964 I have drifted even further, towards the use of electrical, and pneumatic devices in my sculpture/objects. As electronics and home computers developed, along with my history of development as an artist, I brought these newer technologies into my work in a natural matter of fact way. 1964 is also the year when I integrated sound into the visual/tactile objects to make them more complete. This concern with the tactile (kinesthetic) auditory, and visual relations and synesthesia thereof has remained as an integral part of my work until today.

Drum points specifically in a direction from the kinesthetic object towards nothing (through its transparancy). This nothing is the point/edge upon which the synesthesia acts. This is the edge that joins between object and sound. I worked with the composer James Tenney who composed three pieces specifically for this sculpture.”